GENIKI TAXYDROMIKI has the right (according to ΑΔΑΕ /Hellenic Authority for Communication Security and Privacy limitations) to check the content of the package or the file that it undertakes to dispatch but not the obligation. If the company considers that an object is dangerous for the public safety and health, it has the right to refuse to take up and carry on the movement of the consignment and to inform the competed authorities therefor. It is hereby clarified that GENIKI TAXYDROMIKI does not undertake the dispatching of the following items and documents: Money, Currency, Gold, Precious Metals and Stones, Antiquities, Works of Art, Lotteries, Stocks, Bonds, Sensitive Food, Personal Correspondence, and general items whose dispatching is prohibited or restricted by the applicable law or international conventions. Furthermore, GENIKI TAXYDROMIKI does not accept to transport items not properly packaged, as well as items whose sender refuse to give sufficient information about the recipient, as requested by GENIKI TAXYDROMIKI. GENIKI TAXYDROMIKI has the right upon receipt or at any time after its receipt to refrain from the arranging of the dispatch to be carried out, if there are indications of prohibited content or incomplete information about the recipient and if no customs declaration has been made when required by the applicable customs regulations.

GENIKI TAXYDROMIKI makes every effort and takes all the necessary actions for the fastest delivery, according to its operational program. But in no case is responsible for the delay of the receipt, transfer or delivery of each shipment or for any loss, damage, incidental or consequential damage, loss of profit, for improper delivery or non-delivery due to unforeseeable causes or force majeure, such us non-restricted: a) due to unexpected event beyond human capabilities (accident independently of liability, adverse weather conditions, delay of transport, strikes, war or general or partial recruitment etc.) b) due to the act, omission or misconduct of the sender or the recipient or of a third person having an interest in the particular transfer c) due to the content of the transport in which special damage may occur, alteration or destruction. In addition, GENIKI TAYXDROMIKI does not bear any responsibility for any incidental or consequential damage or loss of profit, due to delay or non-delivery or damage or destruction of the item, when the sender does not declare the type, the nature and the value of the postal item and these are not listed in the ΣΥ.ΔΕ.ΤΑ./Accompanying courier coupon or when the sender did not issue and did not hand over to the company statutory tax documents and the supporting documents as well as the case specified in the Code of Conduct for the provision of postal services in the no. 688/53 decision of ΕΕΤΤ. The indicative delivery times are listed on the company’s website www.taxydromiki.com and its official price list. Under no circumstances may any compensation for delay be exceeded by the amount paid by GENIKI TAXYDROMIKI for cases of loss of uninsured shipments, in particular those referred to in Article 8 hereof.

The sender guarantees that: a) every item written in the front page is well-described and according to the law b) in the item under dispatch, the required parts, details and address of the recipient have been correctly noted c) the item under dispatch is properly backaged to ensure its safe dispatch d) he will pay any additional costs incurring in dispatching, returning or storing the items as well as any additional charge due to the nature of the item.

GENIKI TAXYDROMIKI haw the right to withhold or not to deliver any item that transfers, in order to secure the expense resulting from the transfer (fares – bills of landing etc.) until he/she pay off.

GENIKI TAXYDROMIKI carries out all the transfers of purchase, collect on delivery and transport also with a non-written (telephone, electronic etc.) order. In such cases the principal has the rights and obligations of the person listed in ΣΥ.ΔΕ.ΤΑ./Accompanying courier coupon, as the “sender”.

In case of destruction or loss of the items transferred, the liability of GENIKI TAXYDROMIKI is limited to 70 € for documents and 400 € for parcels. (for transfers in Greece, from Greece to Cyprus and from Greece to Bulgaria) according to the real value of its content. The real value of the content of the transfer for the documents is the cost of their re-issue, replacement, reproduction or redraft and for the items is the cost (net value- before value added tax) of their repair, replacement or purchase as evidenced by supporting documents from the beneficiary, taking into account the item at the delivery time. No commercial utility is taken into account for the calculation of the true value nor any special utility that the content of the transfer may had for the person entitled to compensation. The sender or the each time user of the services (recipients, principal etc.) accepts unreservedly the above maximum accounts of compensation, which include any compensation for non-material damage, and the resulting loss of profit is not compensated according to no. 688/53 decision of ΕΕΤΤ(ΦΕΚ Β’ 1412/10.6.2013). The sender declares that he waives any additional claim against GENIKI TAXYDROMIKI from any incidental and consequential damage of loss of profit from any cause, in each case he declares irrevocably that he allows dept from that causes. The above amounts apply per transfer and can not be higher even if the company previously taken into account the potential risk. GENIKI TAXYDROMIKI has no knowledge of the content of the transfers and because of that the sender acknowledges in the event of non-insurance of his/her transfer that the value of the transfer’s content is covered up to the above mentioned amounts, in other case he/she bears the liability for any excess amount of their value. In order to pay the above amount to the beneficiary of the compensation there should be a proven liability of the Company and the beneficiary should follow the procedure of article 13 of the present. The sender considered to be the beneficiary of the compensation and in case there is a notification to the Company of his/hers written waiver then recipient of the transfer. In the event that the sender and the principal for the dispatch of the transfer is different the beneficiary of any approved compensation considered to be the originally listed in the accompanying courier coupon as the sender of the postal item, not the principal and in case of a waiver of the person listed as the sender then the recipient. The above amounts of compensation also apply for transfers with declared value when they are not insured according to the following. In addition, depending on the value of the postal item declared by the sender, each postal item can be insured for loss, theft or destruction, through the insurance company that cooperates with GENIKI TAXYDROMIKI for a sum greater from the above, with a user’s charge of 0.6% on value of the item. To give rise to the claim for the additional amount of the compensation the content of the transfer that was lost or stolen must be declared of its value, insured for that and the additional cost for premium has been paid on time. If the value of the transfer has not been declared and the corresponding additional cost of the insurance has not been paid the claim is not incurred. It is expressly agreed that in the event that the user of the services (principal, sender or third person) makes insurance for the items transported through GENIKI TAXYDROMIKI with another insurance company of his choice, and not with the insurance company who cooperates with the Company, the responsibility of GENIKI TAXYDROMIKI in no case exceed the amount of 70 € for documents and 400 € for parcels. (for transfers in Greece, from Greece to Cyprus and from Greece to Bulgaria) and each time amount in Euros of 100 US dollars (for international transfers outside Greece and beyond them to Bulgaria and to Cyprus) against anyone including the insurance company concerned . In the event that the mail item under dispatch by GENIKI TAXYDROMIKI has been insured by the user of the company’s services (principal, sender or third party) with an insurance company or with an insurance policy of his/her choice, declares that he/she guarantees that the insurance has included the term of resignation of the insurance company’s right of reduction against the company (courier) and is responsible to GENIKI TAXYDROMIKI for any damages may be caused by the failure to include the above condition to the insurance cover of his/her choice.

The user of the services explicitly states that he / she knows and accepts all the charges under the official price list of the company in the Company’s website www.taxydromiki.com. He/she also states that he recognizes and accepts under the official price list that the charge of any transfer depends on its volume and the weight. In the event that the result of the titration (length x height x width in centimeters/ 5.000) is greater than the weight of the weighting then he/she accepts that the charge is made in accordance with result of the titration in the framework of IATA regulations.

For each transfer through GENIKI TAXYDROMIKI and if it is about items, it is required to be accompanied by all the necessary legal documents for the transfer.

Each claim must be made by the beneficiary and must be delivered to the offices of GENIKI TAXYDROMIKI within six (6) months of the day of the assignment from the Company. Any dispute may be settled through a amicable settlement or through the Dispute Settlement Committee set up by GENIKI TAXYDROMIKI. For any dispute between the user and GENIKI TAXIDROMIKI the courts of Athens are competent. For those not defined in the present, the Map of Obligations to the Consumer of the Company applies as posted on the official website of the Company www.taxydromiki.com. The user of the Company’s services states that he get full knowledge of what is written on the Map of Obligations to the Consumer of the Company and he/she accepts it. For any information users can communicate with the competent store for their favor, with the central offices of the Company , on telephone in 2104851100 and written with a fax , e-mail etc.

If the sender uses the special system for the electronic issue of the accompanying courier coupon he states that he knows and accepts the present terms. In case of the delivery of special device equipped with the electronically information system of the dispatch and monitoring the transfers, the digital received signature of the snder or the recipient through a special device has a position of signature of the present.

Enter your address to find our nearest office. 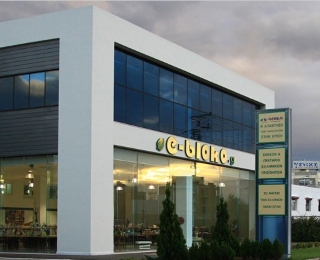 We think and act Greek

The fastest Cash on Delivery service in Greece.